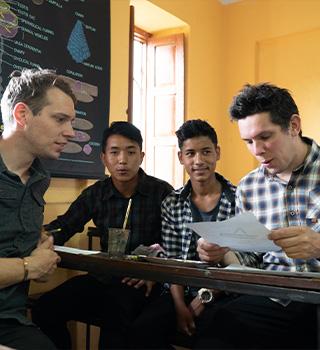 The Brothers Go To Buckingham Palace

The Gandys brothers lost their parents in the Boxing Day Tsunami in 2004, whilst travelling the world. Since then, they have made a vow to build campuses around the world for underprivileged children in underdeveloped countries, all in honour of their parents. We were honoured to be invited by Prince William and Prince Harry to Buckingham Palace for the launch of The Queen’s Young Leaders Programme.

After losing our parents at a young age through the 2004 Boxing Day Tsunami, we are determined to turn our tragic experience into one of positivity. Using fashion as a force for good through Gandys, we have been able to build Kids Campuses for underprivileged children in Sri Lanka, Malawi, Nepal and Brazil with a fifth coming soon in Mongolia. These campuses are able to provide shelter, nutrition, medication and education to children who otherwise would not have access to it.

After everything we’ve been through and worked for, it was amazing to not only just have our efforts recognised by the Royal Family, but also to stand as an example to the younger generation of The Queen’s Young Leaders and to be able to assist them on their missions, which weren’t too different from our own.

Working to improve the lives and skills of those who are helping their communities, the Queens Young Leaders Programme selects 60 young people from around the Commonwealth and provides them with a tailored package of training, mentoring and networking.

It was great to meet the Prince William and speak with him about Gandys and our ongoing projects. As someone who also lost their mother at a young age, he empathised with our loss and could relate to what we’d been through. He said that although he lost his mother at 15, he felt that there was always a silver lining and in his case, this was having his own family now. He also expressed to us that people who lose parents at a young age often have to dust themselves off and carry on, urging us to continue with our good work.

Prince William also said to us that you should always believe in yourself and to never give up on your quest, which is the message which we would also pass on to other young people. We really enjoy supporting young people and are delighted to be involved with this initiative as the well-being of young people is an issue that’s close to our hearts. As passionate as we are about building kid’s campuses, our goals cannot be achieved without the help of the Gandys community. Every purchase made with Gandys helps us to build more campuses and help children around the world. Click here to learn how to become a Gandys Ambassador.

Don’t Just Exist, Give Back!

Accessories
Outlet
About Us
More