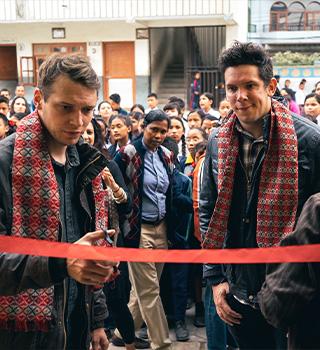 15 Years Since The Tsunami

Every Boxing Day marks another year since the worst day of our lives. The day that changed everything. A day that one of the worst natural disasters in history made global. We remember it as if it were yesterday, it is something that will be a part of us forever. It’s not only 15 years since the tsunami, but 15 years since we lost our parents and our world fell apart.

In some ways, we were luckier than most. Unlike some families affected by the disaster, we had a massive support network when we came home from Sri Lanka three weeks later. Our older sister became the mother figure we needed at this difficult time, not only looking after us but adopting us as one of her own. Without her we wouldn't be here today. There were a number of paths that we could have followed after we lost our parents. However, they always told us to stay positive, live life to the fullest and strive to achieve greatness in whatever career we choose. We wanted to create something that would make them proud, and something that they would have wanted to do themselves. They always taught us to give back to the less fortunate, so that’s what we have decided to do when we founded Gandys.

I (Rob) asked Paul to come home from Australia, where he was living at the time, to start a new venture together. So in 2012, Gandys was born. Our main goal was simple: to give children across the world a better start in life. Our first product was a flip flop made out of hemp material that had been woven by women in Sri Lanka. We wanted the flip flops to represent the steps we have taken since that fateful day in 2004. Now we have expanded the range, specialising in backpacks and outerwear. There are so many things that we love about Gandys, however, our favourite moment will always be opening our first kids campus in memory of our parents in Sri Lanka 2014. It proved to us that as long as you set your mind to it, you can achieve anything. We knew that our parents were proud of us on that day, which was an incredible feeling.

Since then we have opened three more kids campuses in Nepal and Malawi and Brazil with another one on the way in Mongolia. We couldn't have done this without you guys, our ambassadors! Your support and ability to spread the word of Gandys around the world has what has allowed us to give back to the less fortunate. We won’t stop, there’s so much more work to be done, helping more countries, children, and societies to live a fulfilled and happy life, where they don’t feel scared to leave their homes. But we can’t do this without our ambassadors, the Gandys community.

You guys are the future of Gandys!

Our Story Gandys Foundation Become A Pioneer View All
l